How are Caskets Buried? 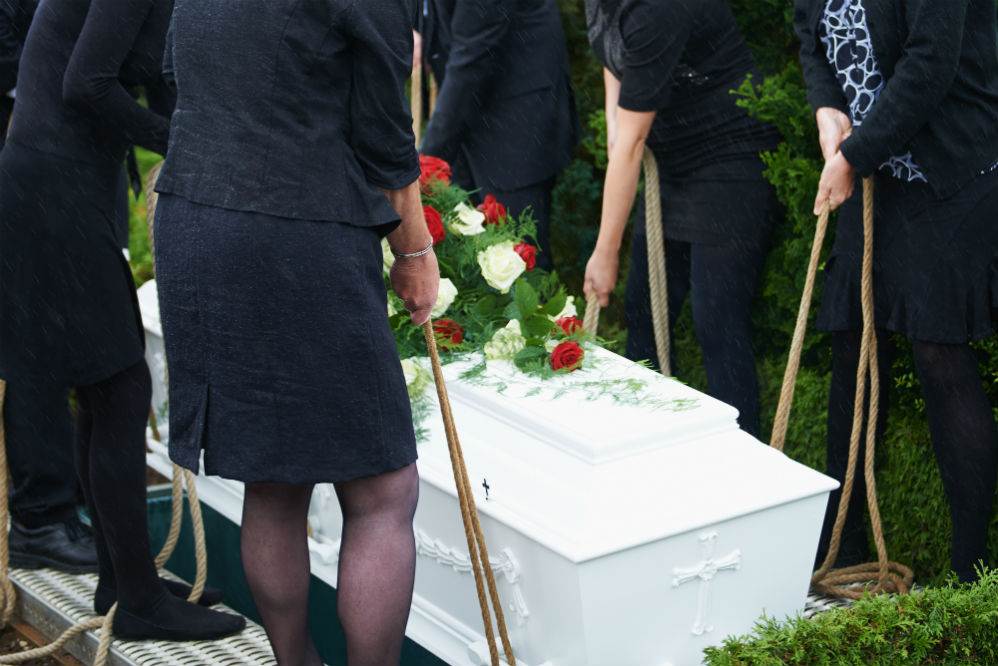 Death is a natural part of life, and something that every single person on this planet has to face at the end of their life. Funerals are often one of the hardest parts of saying goodbye to our loved ones, and for that reason we want to make them as special a sendoff as possible.

Many people however during this stage are so emotionally caught up in their grieving process that they don’t fully know what goes on during the burial service, and how their loved one’s casket is actually buried.

In this article we take a look behind the curtain at how caskets are buried, so you never need to wonder again, and also to give you a better idea of what happens at the funeral parlor. We also take a look at the difference between coffins and caskets.

Difference Between Coffins and Caskets

You might not know that a coffin and casket are actually two different types of burial boxes, However, if you experience a sudden loss in your immediate family, then you will have to know the difference when it comes to choosing between one or the other for the funeral.

Often when most people imagine a funeral service, they see what is known as a casket. A casket is a what is used to hold the departed person’s body. It is usually used during the funeral service and allows people to view the body. Afterwards if the family has not decided to go with a cremation, the casket is then lowered into the ground as part of the burial ceremony.

If the family have chosen a cremation, then the casket is not always buried. In many cases it is only used for the funeral service and the viewing of the body (depending on the wishes and in some cases religion of the family). Sometimes a cremation urn is placed inside the casket and then it is buried.

Caskets take on a more rectangular shape and usually include bars placed on each side in order to be carried by family members.

Many would think this description is that of a coffin, so what is the difference?

Like a casket, a coffin is also a box which has been specially designed to hold a deceased body. It can also be used for the funeral service as well as the burial.

The main difference lies in the design of the coffin. Coffins generally tend to have six sides, whereas caskets do not. When you see fake coffins at Halloween for example, they are usually the typical styles of coffin that resemble the real thing. They are also popular in Western movies, and older films.

When it comes to prices, there is not such a huge difference between coffins and caskets. Coffins are typically built to be a bit narrower at the bottom, which saves more money on wood. They are mostly designed to accommodate a wider shoulder width of a body to a narrower width of feet, and this means that they tend to be slightly cheaper than caskets do.

Coffins can usually cost around $5,000, whereas caskets can vary from $6,000-$40,000 depending on the quality of course. Some people can have personalized caskets which feature gold lining and this is common especially for famous people or those of great rankings, i.e. kings and queens.

The choice ultimately depends on budget and preference of shape, however both caskets and coffins are appropriate for a funeral.

How are They Buried?

Now we move on to how caskets are actually buried.

Generally, during the burial process, the casket is lowered down into the ground, and placed within a vault. Once it is in place, it is then buried under at least 2 feet of fresh soil and dirt. A memory stone is then erected at its site and this is where family members and friend can come to remember their beloved family member for years to come.

Usually, before the burial service even takes place, prior to being buried, caskets will require a burial vault to be lowered into. The burial vault is a durable construction of metal, concrete and hard plastic and its purpose is to support the casket and protect it from encroaching elements. A burial vault is a complete enclosure in which main aim is to protect the casket for years to come.

Caskets can also be lowered into a linear vault. This is a vault which only includes 3 sides, and means the casket will lie upon the bare ground underneath it, unlike the burial vault which keeps it enclosed. The main aim of these vaults is to stop the ground caving into the caskets, and leaving sinkholes through the cemetery. For this reason, many cemeteries put burial vaults into all of their graves, and don’t allow people to bury without them.

What is Best – Casket or Coffin?

To be perfectly honest, there is no real difference between what a coffin will do for the body to what a casket will do. Both coffins and caskets will perform relatively the same job, in preserving the body for a certain amount of time. The choice of which one is best for you is certainly more likely to depend on your personal taste, budget, and the type of burial you are actively looking for.

In the end your loved one really is no longer there, and so it shouldn’t be such a major decision.

We hope that this article has given you a bit more insight into how caskets and coffins differ, and how they are buried. Now you should hopefully have peace of mind knowing that the process is not so mysterious, and we remind you that death is a natural part of life and something that you should never fear.